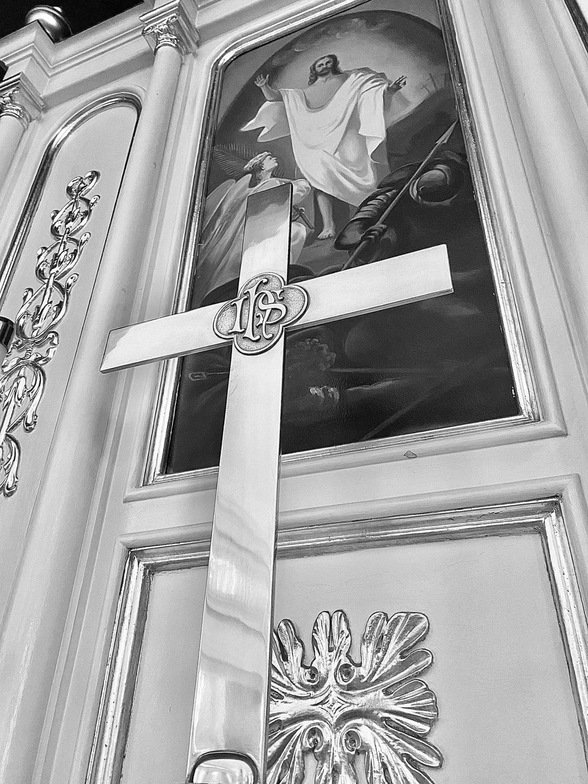 This architectural gem we call St. Johannes Lutheran Church, which is on the National Register of Historic Places, has managed to escape the destruction too many in Charleston have suffered from fire, hurricanes, and war.

In 1841, a group of German Lutherans settled on the 48 Hasell Street site in historic Ansonborough. They commissioned nationally renowned architect Edward Brickell White to build the church in his classic Greek revival architectural style. Their leader was Johann Andreas Wagener, who was later to become mayor of Charleston.

But 30 years after the church’s dedication in 1842, the congregation, then known as St. Matthews Lutheran Church, had outgrown the Hasell Street sanctuary and relocated to King Street. In 1878, a group of 52 Lutherans decided they wanted to return to their “home church.” Retaining the German language in the service is said to have influenced that decision. The Hasell Street church was purchased from St. Matthews and rededicated as the “Deutschen Evangelisch Luthenschen Sanct Johannes Kirche.” The service at St. Johannes continued to be conducted in German until 1910.

As the congregation grew, new facilities were added, including the construction in 1927 of a larger parish building on Anson Street. That construction required the church’s elegant, wood-framed Sunday school building to be moved to the back of the extensive property. Miraculously it survived intact. It now serves as a place for quiet contemplation and is also available for small weddings. The parsonage at 50 Hasell Street, now known as a unique Ansonborough wedding venue, was acquired in 1919.

The church facade and interior have faced several changes over the years, including a new entrance with a marble tile floor and Art Memorial Windows. Visiting members of the Society of Gilders who added 22 K gold gilding to portions of the lectern, altar and pulpit provided one of the most stunning modern-day enhancements.

Over the years, the church has retained noted ministers and musicians, from the Rev. Dr. I. E. Long, who served the church for 37 years, to an organist who was in her post for 54 years, and a current member who has marked more than 70 years in the choir!

The church continues to build on its musical heritage and tradition of hospitality that are dedicated to providing a place for all people to discover the heart of God in the heart of the city. Services in the church are at 11:45 am on Sundays.

What’s known as the great fire of 1838 is recorded as having destroyed more than 1,000 buildings in the heart of Charleston, including most of those in what is now the city’s historic Ansonborough neighborhood. The 1846 residence at 50 Hasell Street is among the homes, churches and businesses that literally rose from the ashes within a decade.

According to a history of the property published in the local newspaper, there was a dwelling on the property as early as 1779. After the fire, the owner had what amounted to a large vacant lot. The land that bordered on Anson and Hasell Streets was sold to a group of German businessmen who commissioned the construction of what now is St. Johannes Lutheran Church. The doors opened in 1842.

A few years later the property adjoining the church caught the eye of a visiting planter, who built a 2-1/2 story home, raised on a full story basement and topped by a spacious attic. The first floor originally had a double parlor. Those rooms now function as a parlor and drawing room and may be separated by handsome pocket doors. The first floor now also includes a dining room, kitchen and powder room. The second floor has three bedrooms. Rooms on both floors were designed to open onto piazzas. A carriage house located in the rear of the property is thought to have once served as the kitchen outbuilding. While the carriage house can still be accessed from the parsonage garden, it now is connected to a church auxiliary building and primarily houses Sunday school classrooms.

Other notable features include an ornate, cast iron fence, a Palladian window that looks onto the street and an eye-catching front entrance with etched glass inserts. According to Historic Charleston Foundation experts, the architectural style is transitional Italianate.

The grand home was first sold in 1853 and purchased by St. Johannes in 1919. Since then, The Parsonage in Charleston has been home to a relatively small number of families, primarily due to one pastor’s 37-year service.

By 2014, the years definitely had taken their toll. The last pastor in residence departed in 2006. His successor, who later retired, owned a nearby home. After years of dispute over whether to restore or sell, the congregation unanimously agreed late last year to borrow the funds to bring the property back to life.

The restoration included much-needed interior and exterior work, including the creation of an English-style garden. The work began paying dividends almost as soon as it began. For example, more than 20 layers of paint weighing more than 200 pounds was painstakingly removed revealing beautifully detailed woodwork and a solid mahogany stair rail.

This historic property is now ready to resume its role as a vibrant part of the life of the St. Johannes congregation and as a beautiful, welcoming community asset.

Subscribe to receive email updates with the latest news.